I confess: I let my child crawl on public spaces. Everywhere except restrooms, hospitals and clinics.

I'm sure that the thought of a child crawling on public property would gross out some people, parent or not. But to me that's fine. I'm the type of mom who'd let her child explore as long as he wasn't in any imminent danger, such as being hit by a truck or being eaten by a bear or being electrocuted or drowning or being burned alive. Yes, there's the danger of getting sick but I don't think his risk is any higher than other kids. There are dirt, bacteria, germs and viruses everywhere. They're in the air we breathe.

Some say that exposing kids to a bit of germs strengthens their immune system. I'm not sure if that's accurate, but I'm happy to report that Ziv is in the pink. It could be the exposure to some dirt that's helping him stay healthy but I think Ziv's strong immune system is more likely because of all the outdoor exercise he's getting. I let him play at the park at least once a day for 30 minutes and I tell you, that guy could be crawling a distance equivalent of a kilometer to an adult.

I may be relaxed, but I'm not careless. When Ziv's out there, I follow him around to make sure that he doesn't put anything in his mouth. I also make sure that after he's done playing, I clean his hands with antibacterial wipes and then wash his hands as soon as we get home. It must be working because, we haven't had any incidents of diarrhea or any infection whatsoever. Thank God!

This entry came about because of something that happened this morning.

Two aunties aka old ladies at the park said "dirty" while pointing at Ziv who was happily exploring the world on all fours. I just smiled at them but deep inside I was irritated. To them that single word probably just meant the ground is dirty and I should not let my little child crawl on it. But to me, that seemed like a commentary on my parenting style. It might be a single-word sentence but it made me feel I was just told I'm a bad mother for letting my son crawl around the community park.

I would understand if the comment came from my mother-in-law. She's supposed to question our parenting decisions. But strangers? I don't know why they'd feel entitled to give their opinions when it comes to the things we let our son do. They may know kids but they don't know OUR kid.

I know there will be more of this in the future. I just need to toughen up and work on that fake smile.
Posted by Kat at 3:31 PM No comments:

We checked in at the Amara Sanctuary Resort in Sentosa over the weekend. It was great to finally get away--even if it's just in Singapore--from all the busy-ness of home. I really loved getting the chance to relax and just be with my husband and son. I didn't have to worry about chores that needed to be done, which was wonderful.

Aside from eating and taking naps, we hung out at the pool. The water wasn't heated though. Since it wasn't severely hot that Saturday, it was quite uncomfortable to get in and stay in. 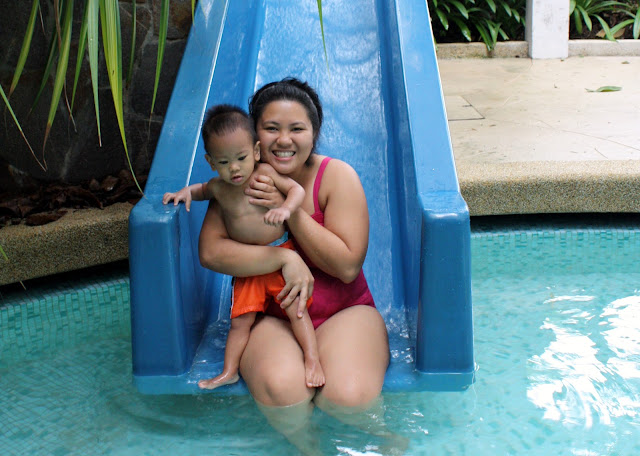 Ziv wasn't thrilled at all! His lips turned bluish after a couple of minutes in the pool so we parked our butts on the deck. We were surprised that Ziv tried walking on his own without any prodding from us.

It's amazing to see him bravely put one foot in front of the other and move. I know it takes a lot for him to do that and we're just so proud of him.
Posted by Kat at 10:08 PM No comments:

I finally got myself a job!

I'm a bit sad that my days of taking care of Ziv full time are numbered, but I'm actually excited to go back to work. It's an editorial job at a travel media company and I'm going to be an assistant editor at one of the inflight magazines they publish.

I've been interviewed twice for an assistant editor role for the same company, but for a different magazine. First was back in 2010 but I never got called back. The second time was just last April but the editor who was supposed to hire me left. The process got stalled and I wasn't hired. I was so bummed about it and even cried out of frustration. It's just so difficult to not get what you want!

On the last Friday of May, I got an e-mail from the editor of another magazine saying that she needs an assistant editor and she wants to meet me. She said the editorial director, whom I spoke with before, forwarded my resume to her. So the following Monday, I went to their office, we talked, we clicked and voila! I got the job. That Wednesday, the HR manager sent me the contract, I signed and sent it back. After two attempts, I'm finally in! Suh-weet! The editor said, "You were meant to be in *insert magazine title here."

Everything happened at the right time. My ego was close to being crushed and I was getting desperate in my job hunt. Just a few days before I got that exciting e-mail, I was ranting to one of my closest friends, George, about how it's taking so long for me to get a job. She told me everything would eventually work out and shared to me an article written by Bo Sanchez about detours in life. It was comforting to think that perhaps I was in a detour and soon I'd get a break. I just needed to remain faithful and open.

Around the same time, I had an online chat with my friend Dani. She asked how I was and I told her I was getting frustrated in my job search. She asked me if I really wanted to go back to work. My knee-jerk response was "No. Ayoko na. Kailangan lang kasi."

Up to that point, I haven't really given returning to work much thought. I never gave myself time to process that decision. Going back to work once Ziv turned one was always something I knew I needed to do. I never felt I wanted it.

However, during one of my morning walks with Ziv, I realized something. I can't remember the thought process but I came up with the realization that I missed being utilized for something big. I missed being part of a team that worked together to produce something useful. I realized I missed working and being productive! I was surprised because I didn't think I'd feel that way.

I guess I was just afraid. I was afraid of taking on more responsibilities. I was afraid of not having enough time for Ziv. I was afraid of not being a good enough mom. I was afraid to want things for myself. I was afraid of change. Fear just had me in its grip. But I think the moment I realized that I do want to work again, I was released from my fears and I became ready to receive God's blessing. The Universe' wheels turned and I got the break I was waiting for. Might sound too New Age-y but it's true!

Only 19 days are left till I start working again. I still get anxious about all the changes that are coming our way. I don't know how we'll cope but I know that we will. By hook or by crook.

I sometimes feel sad when I think I have to be away from my son, but it helps to think that I'll always be his mom. Working doesn't mean I stop being a mom; I'm just adding a new dimension to my mom-ness. I know being a working mom ain't easy, but it can be done.
Posted by Kat at 3:44 PM 4 comments:

Email ThisBlogThis!Share to TwitterShare to FacebookShare to Pinterest
Labels: reflections

In the land of the skinny.

I've proven that yet again last Sunday. I went out on my own to shop for work clothes (yes, this momma is rejoining the rat race! more on that later) and after scouring three malls, I went home with just a piece of knitted top and a swimsuit (for our staycation this weekend).

There are choices here for big girls like me but not as much as the options for slender ladies. I currently wear a size 14/16 and only a couple of boutiques carry that: Marks & Spencer, Dorothy Perkins, New Look and Warehouse. Large at Forever21 can fit me too.

This is why I love to shop in the US! There are plenty of plus size options there. Just take a look at my Pinterest board and you'll see what I mean.

Maybe I should just start buying online.
Posted by Kat at 10:18 AM 1 comment:

life is one long laundry day


It's laundry day. I was sorting our dirty clothes earlier. As I made piles of whites, lights and darks, I found myself wishing I could sort all my thoughts and feelings like that. Just pile them high on the floor, by color. It would be definitely easier to make sense of all of the intellectual and emotional clutter when you can organize them like that.
Posted by Kat at 10:13 AM No comments: